You may remember my visits to The Chimpanzee Conservation Centre (CCC) in Guinea (North West Africa) over the last 2 years and my story about Coco, a very special resident chimp there, who stole my heart. I met Coco on both my visits and fell in love with him.  He is my all-time favourite animal – don’t tell my dogs Shooosh🤫🤫 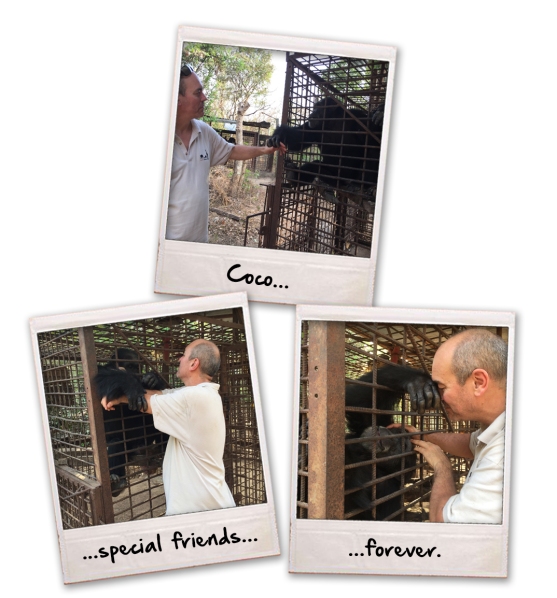 After being taken from his mother in the wild as a small baby he was kept by hotel owners and tied to a reception desk to entertain guests.. He was even taught to smoke and drink beer as a form of amusement.  At the age of 18 he became too big and dangerous to manage inside the hotel so he was tied to a tree in the garden, again to entertain guests. One day he managed to break free and was shot 5 times in the back and legs by the military police for fear he would harm someone. It was at this stage that CCC took him in and nursed him to recovery. He has lived at the sanctuary since 2001.

Coco is 39yrs old now and has been living at CCC for the past 18 years. Sadly he has spent a lot of this time on his own in a relatively small cage as attempts to integrate him into large enclosures with other rescued chimps have failed due to a number of reasons.  Firstly his inability to socialise with other chimps as being raised by humans, he can’t really speak “chimp” 😥 and, secondly, when CCC did manage to get him into an enclosure for a while,  he managed to escape which posed a danger to CCC staff and himself. He did live in a large enclosure for 5 years at one stage but then he became an escape artist….

Sadly he will never be able to return to the wild as he has been deprived of the natural survival instincts he would have learnt from his mother and peers and he lacks the social skills necessary to become part of a potential release troop. 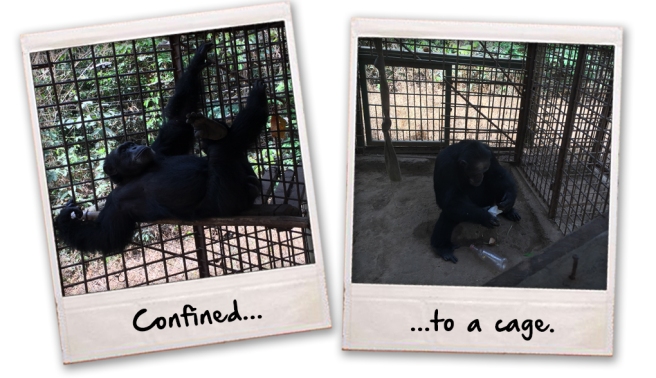 The dedicated team at CCC have taken really good care of him and he has food, shelter and human love, but from the moment “we met” when he was living in this cage no bigger than the size of an average kitchen,  I just knew he deserved better. He needed a large, escape proof enclosure for himself, something CCC could not afford to provide him with.

When I left the CCC camp after my first visit, I looked my new friend Coco in the eyes and promised I would get him out of this cage one day. OAT then agreed to build a state of the art ‘escape proof’ chimpanzee enclosure so that Coco could live out the rest of his life climbing and sleeping in trees and be out in the open where he belongs.  2 yrs have now gone by and Coco’s new very large ‘escape proof’ enclosure was finally completed in late Dec 2018.

I have tears in my eyes writing this because Coco is now FREEEE……..he was released into his new enclosure on the 1st Jan 2019.

Below are some pics & videos of Coco being released and looking very happy in his new enclosure. This was the perfect New Year present for all of us at OAT and CCC and I would like to take this opportunity to congratulate the CCC team on making this happen. A dream come true for all of us and of course for our beloved Coco. I can’t wait to visit him again which I hope to do later this year!  Notice how he claps and makes excited chimp noises immediately he is let out of the cage! 😀 It might seem extravagant for one chimp, but we and Coco don’t think so! Its life changing for him and every life counts.  CCC have also committed to try and introduce a companion into the enclosure once Coco is settled. I will keep you posted!