Still in Kenya and moving on from Amboseli, we met the legendary Richard Bonham. Last year, at the TUSK awards, Richard received the prestigious Prince William award for conservation in recognition of his life time contribution to wildlife and the Massai Mara community in Kenya. He is the co founder of the Big Life Foundation. Check it out, probably the most impressive and diverse organisation I have come across so far.

Will Travers and I spent a day being shown the fantastic work of Big Life including Elephant, Rhino and Lion protection and human/wildlife conflict & community education.

The next and final project we were planning to visit was Ngulia, a well established Rhino Sanctuary partly sponsored by Born Free,  located in the Tsavo West national Park.

Sadly… we didn’t make it!  The rains came, which is great news for Wildlife, but not for us!

Shortly after leaving camp at 8am, we got stuck in the mud and spent the next 10 hours in a swap digging and winching the BFF Land Rover from tree to tree in the rain, heat and sunshine. I ended up with cuts and bruises all over and thorns in both feet. 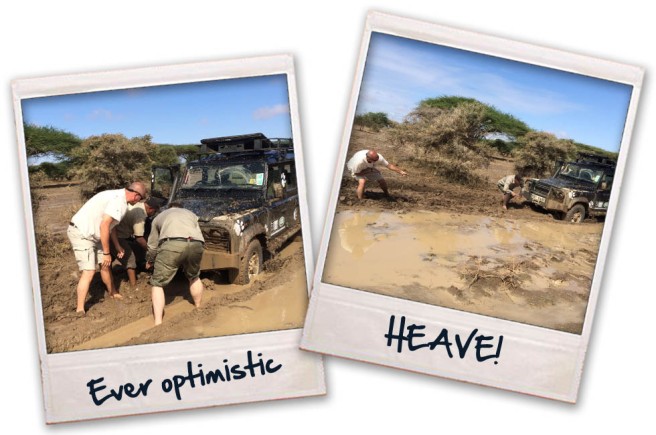 Check out the video…

Richard Bonham of Big Life flew over at 11am, circled us and dipped his wing on a really low fly by to suggest he had seen us and possibly to suggest a direction we needed to go in to get out of the swamp. All guesswork at this point.  What we didn’t know at the time was that he had called for a rescue vehicle for us and we found out later that they also got stuck!!

Anyway at 3pm we eventually gave up as the vehicle just wouldn’t budge any more. We abandon the Land Rover and began our walk to dry land, knee deep in mud with our bags…At 4pm Richard flew over us and dipped his wing again.  Which meant, I don’t know what……..?😜

To add to the drama we spotted three large Bull elephants en route. The biggest I’ve seen so far.

We eventually found Massai Mara villagers who walked us to a hill to find mobile phone signal. We called KWS (Kenya Wildlife Service) who eventually rescued us at 7pm.

Finally we began a 3.5 hour, very bumpy journey, back to camp on the back of a truck with a Massai Mara warrior.  The Born Free vehicle was left in the swamp overnight and pulled out the following day by a tractor from a KWS (Kenya Wildlife Service) base 50km away. 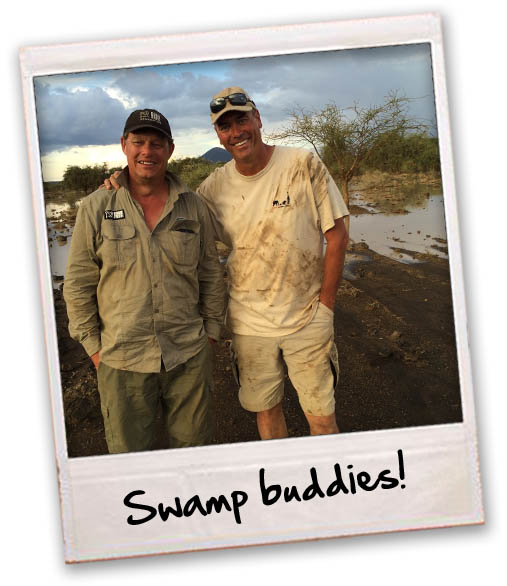