I will be off to Africa and Asia again early next year to spend time with existing and new projects on the ground. I will keep you posted as always but in the meantime here  is some feedback of the fantastic things that have been happening lately…

The Mnkhanya community in Mfuwe, South Luangwa Valley in Zambia 🇿🇲 have been putting the OAT sponsored bore hole and irrigation system to good use. Their vegetable garden not only feeds themselves, but also provides income as they sell the surplus to the local community. They have started producing Rape vegetables, lettuce and Sweety Battle spice which are all flourishing.  What a great example of how water can be used in a meaningful way to bring positive change!

The Mnkhanya scouts have also been working hard. Here they are at their Monday morning briefing before going out on de-snaring patrols. Every one of these snares is an animals’ life saved! 👍😀🐒🐘

On my last last trip to CLZ, I met one of their students on their conservation programme. David Muzengeza David’s passion is the wildlife of Lower Zambezi and he would like to be a game ranger one day.

He was struggling with his studies due to a lack of course material.

OAT supplied him with everything he needs to pass his exams and now he’s studying hard and doing really well. Hopefully it wont be long until there is another passionate conservationist out in the bush making a positive difference for the wildlife.

The program run by the dog and cat team in Guangzhou is also going very well! They gave some public talks in Chengdu last week about farmed and performing animals and there were more than 100 in attendance. A great boost for them, showing that more and more people are becoming interested in animal welfare 😁 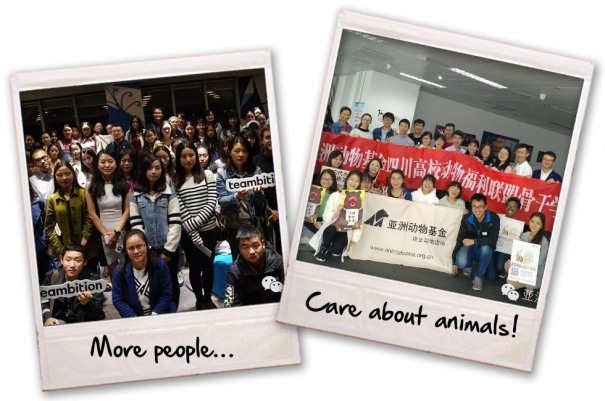