OAT recently agreed to support the Chimpanzee Conservation Centre (CCC) located within Haut Niger National Park in Guinea, West Africa. This is the first time we have supported a West African based project, but when we were made aware of CCC’s work and their urgent need to increase capacity,  we felt compelled to help. We have never travelled to this part of the world before either, so it’s a whole new area of exploration for OAT in general. 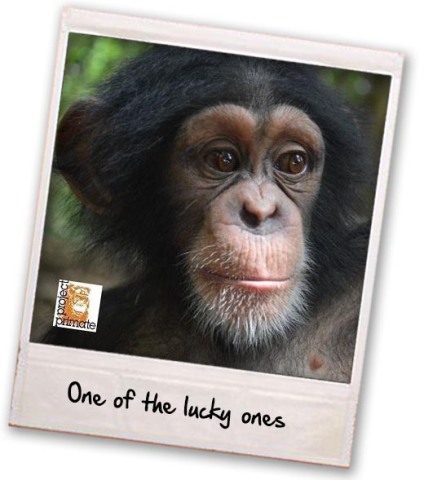 Dave, aka OATOKE, will be spending the next 10 days at CCC in Guinea getting to know the organisation, but due to the extreme remoteness of its location, he will probably not be able to update us on his findings until he returns. I thought therefore, that I would give you some background on the project in the meantime and why we feel so strongly about supporting it.

Chimpanzees, who are indigenous to west Africa, are regularly and illegally stolen from the wild. This is fuelled by the demand from foreign countries who are prepared to pay substantial amounts to own a pet chimp, and zoos and circuses who make huge profits from visitors paying to see these these poor creatures behind bars and being forced to perform in the name of entertainment. Buyers are willing to pay incredibly high prices for chimpanzees making it a very lucrative business.  Sadly, baby chimps aren’t the only victims of this dreadful trade and their parents / families who are shot during the capture,  often end up fuelling the illegal trade in bush meat.

Many organisations, some of whom we also support, are continuously fighting to combat illegal wildlife trade and when they are successful in their missions, chimpanzees are often confiscated and in need of rehabilitation. This is where CCC in Guinea come in to play, as they rehabilitate and where possible, return them to the wild. This process can sometimes take up to 10 years due to the extent of trauma experienced.  Those who are successfully rehabilitated are released, but sadly, for some of them this is just not possible. These chimps are then provided with life time care at the centre. CCC recently applied for funding to extend their facilities at the centre to enable them to rehabilitate more Chimpanzees in need and we agreed to help.

If we do manage to hear from our OATOKE On the ground, we will blog again, but in the meantime, here is some good news that we received from CCC a few days before he left.

It is an interesting story and will give you an insight into the extent of the work involved when dealing with the illegal trade in wildlife.