I was incredibly privileged to be able to participate in one of the health checks here at the sanctuary. They are completed  every two years on each bear in Animals Asia’s care.

This particular bear Teddy, shown in the photo below, needed her claws clipping (which I was allowed to do), a canine tooth extracted and a hernia also needed to be removed. The hernia had developed in the area where the catheter had been inserted to remove bile, in her previous life on a bear bile farm.

Sadly my next doctor experience was witnessing another bear called Bebe, being euthanised.  After years of receiving very effective pain relief, sadly the time had come when the quality of life was just no longer acceptable. These bears have incredible arthritic problems from being kept in bear bile cages for so many years.

But lets not forget, that thanks to Animals Asia, the last half of Bebe’s life was filled with love and care in the freedom of a Beautiful sanctuary.

The next picture is of a bear that lived in the enclosure next to Bebe who came to the fence when we walked past him after paying our respects to Bebe. I am positive he sensed our sorrow and had come to cheer us up. We have so much to learn from animals….we are so disconnected from our instincts. 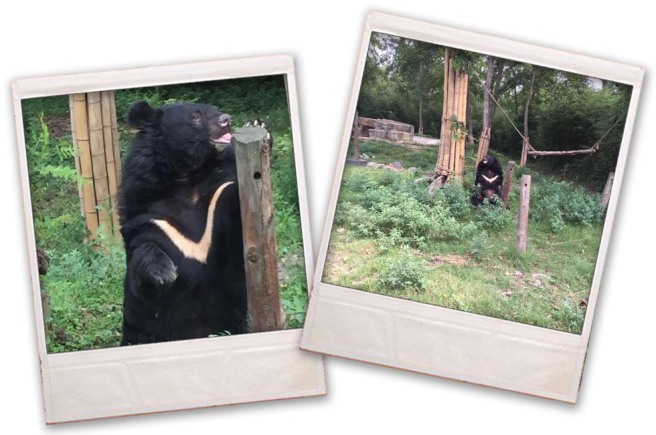 Having said regretful goodbyes to the Chengdu Sanctuary I flew with Jill Robinson to Xi’an where Animals Asia hosted the 7th China Dog Ownership Management Conference.

Held every two years, Animals Asia‘s Dog Ownership Management conferences bring Government and NGO’s together from provinces and cities across China to discuss issues concerning the management of stray and owned dogs.

As the largest such symposium of its kind in China, the delegates are brought together to discuss practical and humane forms of dog ownership management, including the updating of humane policies and regulations, veterinary intervention, disease control, public education, NGO collaboration, and the use of publicity, media help and mobile applications to facilitate this work.

Since 2009, over 250 government representatives of dog ownership management departments in 46 cities across China have taken part in these meetings, together with the relevant NGO’s.

At the end of the day…

Sorry, I could resist including this picture of a sign that was placed on my bed in the hotel.

It was really weird seeing people smoking in the hotel today. I believe they tried to ban smoking in public buildings here but there  was a massive public out cry against it……..😳😳😳