The last part of of my Asian trip was spent in Vietnam with The Animals Asia teams on the ground. It’s been a Hell of a trip and an experience I’ll never forget.  Emotional to say the least.

The first few days were truly “dark”.  I visited domestic bear bile farms and saw first hand, beautiful Moon bears caged up on people’s property.  I know this is hard, and some of you are probably saying right now “I can’t look at this” but please read on. The more people are aware of these atrocities, and spread the word, the more chance there is of local and international pressure being exerted on governments to do something about it.  Also, by reading on you will see the ray of hope that amazing people, like Jill Robinson and her Animals Asia team,  are bringing for the future of these innocent animals. Be brave for the animals who have no choice, or voice.

It felt like I was going back in time and travelling trough torture chambers of bygone years and I am not being dramatic here.  The groans of the bears, as we walked past was haunting. Many were bald from constantly rubbing their heads against the bars, driven to distraction being in a space barely big enough to move , year in and year out in temperatures of over 40 degrees and on top of this wearing a fur coat. Oh, and guess what, they starve their bears so that they produce more bile, and, they are not only kept for their bile but also for their paws (US$500 per paw) Aaaagggghhhh 😡😡😡

These are not photos from archives, these are my personal pics, hot off the press. This disgusting business is happening right now.

These cages are larger than the ones they used to be in. When the law changed recently, the government made the farmers move their bears into larger cages… kind hey? 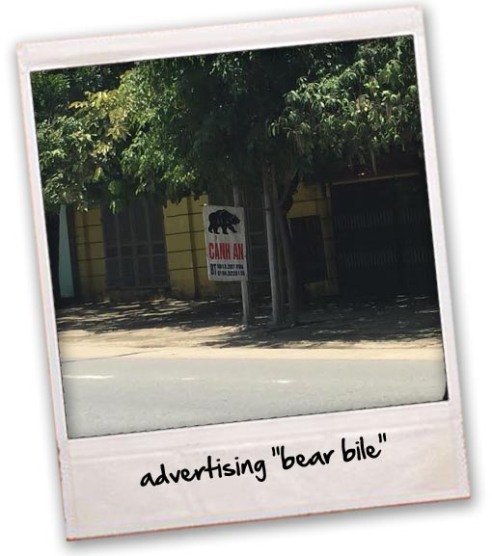 In addition to the bile farms, I also visited Hanoi zoo and one of the  Traditional Medicine Streets. On the street I was very easily able to source pangolin scales and bear bile, (both illegal) and it took 5 minutes for a local dealer to arrive with the goods. I said I would think about it and she gave me her business card and told me to contact her if I needed these items or indeed anything else…

The zoo was pitiful and it broke my heart to see 4 Asian elephants in a tiny enclosure but thanks to Animals Asia, who are working with the zoo to improve conditions for the animals, AA sponsored an electric fence and the previously chained Elephants are now at least able to move around.

In think its time I moved on to the bright side…

Animals Asia have been working closely with the Vietnamese Government and they have recently agreed to phase out the Bear Bile industry over the next three years. Existing bear owners are allowed to keep their bears (like the ones I saw) and legally, are not allowed to farm them for bile. But needless to say this does still go on as its so difficult to police and is always open to corruption. Under some circumstances the bears can be rescued / confiscated and Animals Asia are constantly looking for ways to do this and are succeeding.  This will be a long hard road ahead but it does mean that more and more of these beautiful bears will need to be housed in the future and to maximise these opportunities, Animals Asia  will need to expand their existing sanctuary and if possible build more sanctuaries.

Animals Asia also work with local schools and communities educating the young, and not so young, on animals welfare issues and alternative remedies to bear bile.

The Best Sanctuary ever!

Animals Asia’s existing Bear Sanctuary is situated within Tam Dao national park which is 90 mins north of Hanoi.  It’s a tropical  paradise, lush vegetation, birds, insects and a river runs right through the middle, its…… Beautiful 👍😀

There are currently 148 rescued bears here and remember,  they were previously in the exact same situation as those poor bears I visited at the bear farm a few days ago…… this must be heaven to them. There are still an estimated 1000 bears still in need of rescue 😞😞😪😪

This is the best way for humans to say sorry to these Bears ……. the best animal sanctuary I have ever seen. I’m thinking of buying a bear suit and trying to get accepted here as a resident. Only the best care and respect here for the Bears.

We, OAT, are sponsoring a new enclosure soon to be built here. A beautiful location right next to the river. Work is due to begin in a months time and should take 6 months to complete. Many more enclosures will be needed though…

What a beautiful way to finish an emotional trip to Asia.

I will never give up trying to help these poor bears, still being farmed for their bile.😞😞

I am back home in the UK now, and looking forward to seeing some of you at our fund raising event, in aid of Animals Asia, this weekend.  Fingers crossed for good weather, but I must say I am enjoying the coolness right now!