A slightly belated Happy New year to everyone! I have recently returned from a fabulous family holiday which included an amazing week in the Serengeti. We were lucky enough to see over a million animals in the migration herds – so beautiful, I am at a loss for words, for once!  Anyway back in the UK now and back to OAT business…

Some great news from Game Rangers International, one of OAT’s sponsored projects in Zambia.

Last week their Elephant Orphan Project (EOP) started an orphaned elephant awareness campaign in the Lower Zambezi. This involved Senior Keepers, talking to communities along the river about the importance of rapid response when young elephants are seen alone.

On day 4 of the campaign EOP was made aware of a young elephant alone on an island. It was monitored for a few days to see if it’s Heard returned. Sadly this didn’t happen, so yesterday, with full support from the Zambian Wildlife Authority and local operators, EOP rescued the young male (1.5 years old) and transported him to EOP’s elephant nursery. 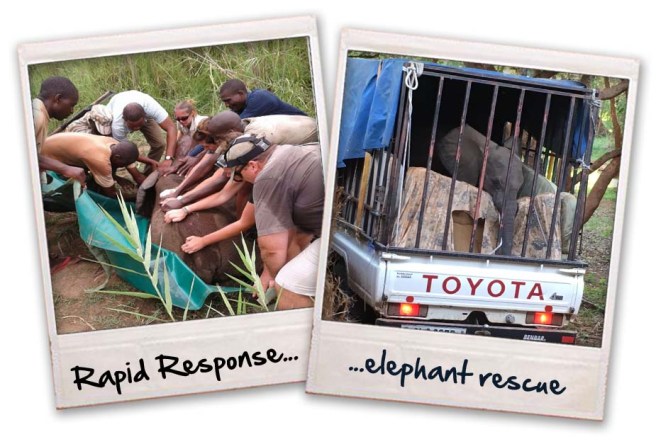 He has been named Muchichili, after an indigenous tree found on the island where he was found.  He is currently dehydrated and malnourished but overall in good condition. He will join other orphaned elephants here at the nursery and eventually through EOP’s release programme in The Kafue National Park, he will be released back into the wild as part of a newly formed orphaned heard.

We are so proud to support the work of Game Rangers International, they are nothing short of amazing!